Community says no to water deal 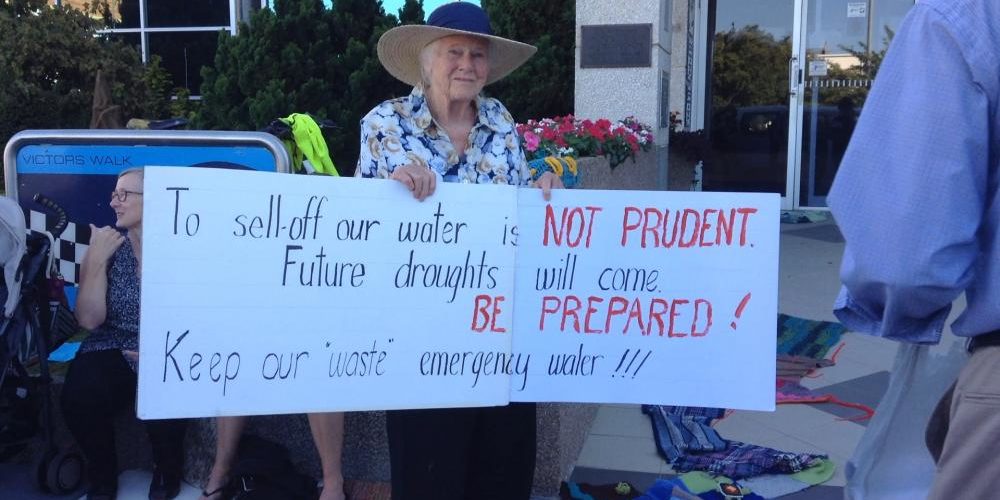 One of the largest campaigns ever seen in Bathurst stood against Council plans to sell the town’s recycled water to a gold mine near Blayney earlier this year.  Regis Resources made a bid to purchase 8-10ML of Bathurst’s recycled water which is currently released into the Macquarie Wambool River. The bid included plans to construct a pipeline to divert the water to their Kings Plain MacPhillamy’s mine site.

Over 2500 people signed a petition urging Bathurst Regional Council to reject the purchase offer by Regis. 1035 people joined a Don’t Mine the Macquarie / Wambool Facebook group actively campaigning to stop the sale and calling on Councillors to vote no to any diversion project. Another flood of 395 proforma letters and 30 speakers at the Council meeting opposed the sale and called on council to protect the town’s water resources and the environmental services of the Macquarie (Wambool) River.

The campaign united scientists, fishing groups, local businesses, students, Aborigi­nal leaders, and community groups, Mums, Dads, grandparents, Sisters of Mercy, and young people of Bathurst in opposition to the proposal.  The Council’s brief and one-sided process for public feedback received 6.5 times more submissions against the proposal.  (133 against as opposed to 20 for). These submissions to Council detailed significant issues with the proposed sale including serious long-term impacts on the Macquarie River, biodiversity, Bathurst water security and downstream users.

The high level of opposition stemmed from very real concerns among the community and local experts over the inordinate risk posed to Council, Bathurst and all those who rely on a healthy river system.

Wiradyuri elder, Bill Allen, Dinawan Djirribang, spoke out strongly against the sale and diversion of water away from the river.  “We’ve got to stop being selfish. The river is already under stress. Why add to it?” “What do we do with the gold? How’s that going to support a town when we run out of water? Enough is enough.”

The Bathurst community have long put water security and environmental protections for the Macquarie River ahead of short term profit for the sale of its recycled water for mining.  In 2008 strong community opposition led to Council voting against a sale of the town’s recycled water to Cadia gold mine. The water has been released to the Macquarie Wambool River for over 100 years and in dry periods represents over 50% of the flow in the river.   Campaign leader and former Councillor Tracey Carpenter, pointed out that following the 2008 decision to not sell the recycled water the Bathurst economy continued to grow and diversify – Cadia found its water closer to home.  “The result was that jobs came and went, housing prices in Orange lurched and lunged.  Bathurst remained a growth centre based chiefly on its long-term water security and appeal as a place to live with its diverse economy,” she said.

The campaign to maintain the recycled water flow to the Macquarie River also questioned Regis’s Resources claims of economic benefit to the local Bathurst economy.  “Regis want over half the amount of water used by the entire Bathurst population and economy but offered a return to the local economy of only 2% at most”.  It was notable that Regis had made the offer of the same 150 jobs to nearby towns – Orange and Blayney at different times,” Ms Carpenter said.  Studies into the impacts of the diversion of water away from the Macquarie reflected loss of water to downstream irrigators and farms and a deterioration on the health of the river but failed to asses the value of the recovering fishery downstream, tourism or the amenity of the river to the community.

What had not been evaluated, said Ms Carpenter, is the cost to our community, our river our water security and the environment, and what value we should place on our precious water.  The campaign adopted the popular slogan “Water More Precious than Gold”.

Council voted to defer the decision and to call for an Environmental Impact Statement by the company.  One councilor Monica Morse voted for an outright rejection of the sale.

Regis Resources board will decide whether to lodge a Development Application and to prepare an EIS without securing a water source for its proposed mine.  This process would take up to eighteen months before any further offer for purchase of water is made.  Plans for construction of a pipeline to the Kings Plain mine site are on hold.

The strong community lobby for protection of the Macquarie River and water resources continues.  Bathurst’s Mayor Gary Rush has agreed to address short-comings exposed in Councils’ public consultation process and to establish a Water and River Management Committee of Council to consult with local experts and community leaders from the group.

My Post to the Don’t Mine the Macquarie Facebook Group following the council vote to defer the sale of recycled water ….

I’ve woken up this morning with the feeling that something quite momentous has happened. I was cautious last night to see this as a victory it is after all a deferral not a reclamation of public benefit perhaps a shot across the bows of private profit. But there is no denying that the Wolves of William Street are snivelling a little this morning wondering where these other forces, these other values came from to hold them accountable. Could it be that this has been the first steps in taking back the social license to exploit all land, all water and to prize open the public purse so wantonly. But it is who this victory goes to that is so remarkable – it is to the Wiradyuri, to the women and to the young. They have shifted the hegemony sideways on its golden plinth (I’ve waited 35 years to use that word).

Bravo Bill Allen, Dinawan, who led with a breathtaking power and a pride that was beaten out of the Wiradyuri in the history books. We learnt the Wiradyuri word for respect and go slowly Yindyamarra; the river is not ours to sell, it belongs to the land. It was the lone woman on council Monica Morse who stood up against the back slapping sneering men’s club of local politics,to say NO. Then there were the women campaigners – apologies to all the wonderful men who stepped up against the winner takes all miners of their gender but it has been undeniably a phenomenon of females claiming a voice. I first noticed it on the insights that social media throws up at you when you manage a Page – our followers were overwhelmingly female 45-64. Now that could be a Facebook demographic but there were a notable number of women leading the campaign. We’ve relied heavily on the knowledge and commitment of our long suffering ecologists, fishermen, farmers and hydrologists even a local car racing legend. But I particularly wanted to acknowledge the words, analysis and passion of wise womenMargaret Hogan Marianne Larsen Margaret Van Heekeren Tracy SorensenStephanie Luke Sally Neaves Trish Powell Marje Prior Helen Bergen@Jill Williams who challenged the spin of corporate marketers and processing bureaucrats to say this just doesn’t add up: water really is more precious than gold. And we owe it to the screen mastery of Benjamin Fry who tapped into hearts, minds to reshape community conversations. Lastly to 13 year old sharp shooter Katie Maree Sargent-Jones , Tessa from out of the blue – we’re glad you’ve got your eyes on those jobs at the big table – I’m feeling a little bit of hope. The gentle warm emotiional kind of hope you get from people knitting rivers in Eugowra the dizzy like a schoolboy kind of hope from LOL Chris McGirr. We’re all going to need it.