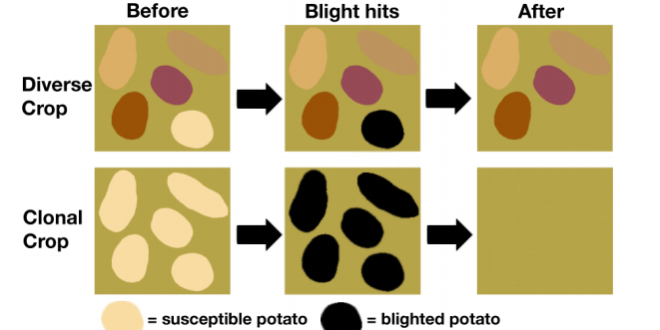 Scientists at New York University have published their analysis that “Genetically modified organisms represent a public risk of global harm.”

In an (arguably well-overdue) holistic, systems approach to the issue of GMOs (Genetically Modified Organisms), the team at NYU point out that

“Bottom-up modifications1 do not remove the crops from their long term evolutionary context, enabling the push and pull of the ecosystem to locally extinguish harmful mutations. Top-down modifications that bypass this evolutionary pathway unintentionally manipulate large sets of interdependent factors at the same time, with dramatic risks of unintended consequences. They thus result in fat-tailed distributions and place a huge risk on the food system as a whole.”

“For the impact of GMOs on health, the evaluation of whether the genetic engineering of a particular chemical (protein) into a plant is OK by the FDA is based upon considering limited existing knowledge of risks associated with that protein. The number of ways such an evaluation can be in error is large.”

“We should exert the precautionary principle here – our non-naive version – because we do not want to discover errors after considerable and irreversible environmental and health damage.”

Insofar as the arguments in favour of GMOs are concerned, the researchers point out that

“An argument used by those who advocate for GMOs is that they will reduce the hunger in the world. Invoking the risk of famine as an alternative to GMOs is a deceitful strategy, no different from urging people to play Russian roulette in order to get out of poverty. The evocation of famine also prevents clear thinking about not just GMOs but also about global hunger. The idea that GMO crops will help avert famine ignores evidence that the problem of global hunger is due to poor economic and agricultural policies.”

“A new study from Duke University finds that people will evaluate scientific evidence based on whether they view its policy implications as politically desirable. If they don’t, then they tend to deny the problem even exists.”

“Logically, the proposed solution to a problem, such as an increase in government regulation or an extension of the free market, should not influence one’s belief in the problem. However, we find it does,” said co-author Troy Campbell, a Ph.D. candidate at Duke’s Fuqua School of Business. “The cure can be more immediately threatening than the problem.”

In other words, the likelihood of global harm through widespread use of GMOs is denied due to the difficulty of solving the problem of “poor economic and agricultural policies” — hence the quick-fix solutions become the preferred, or expedient solution, irrespective of whatever likelihood for global harm is involved.

Read more at Denying Problems When We Don’t Like the Solutions (duke.edu)

In addition to the issue of GMOs, the Duke University study also informs as to why conservative politicians (the present Abbott government) are largely in denial of the adverse effects of climate change. The solution, which involves renewable energy development and other mitigation strategies, is considered too hard, too expensive, or too threatening to their present status or material wealth — hence the blatant denials and their undermining the validity of the substantial amount of science calling for immediate action.