Kangaroos: the world is watching 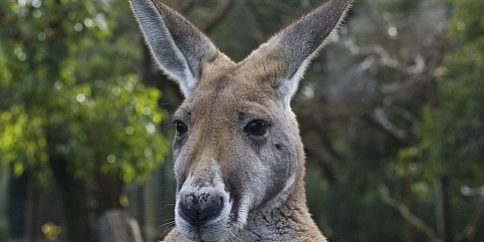 There was a time, not too distant, when “Save The Whales” was a joke. But now, just a few decades later, opposition to whale hunting is a mainstream Australian view. Our foreign minister perfectly comfortable speaking out on their behalf, as she did the other day when Japan killed 300 whales, including 200 pregnant females in Antarctica. Their status has grown rapidly; they’re now majestic creatures, the oceanic equivalent of the noble lion, king of the jungle.

But kangaroos … now here’s another matter. Our views on these bounding animals are many and various. They hold up half of the national emblem, but they’re considered pests. They’re a great tourist attraction, but it’s normal to see them dead and bloated on the side of the road. Children cuddle kangaroo-shaped soft toys and feed their dogs kangaroo meat. Our feelings are complicated.

Like Japanese whaling, our treatment of kangaroos on Mount Panorama is internationally visible. The annual V8 race brings the eyes of the world. People from other countries see none of the in-house squabbles we may have with kangaroos; they just see the iconic animal.

We may see them as plentiful and problematic, but for the rest of the world, they’re in that exclusive imaginative state that only a few animals achieve: they’re up there with lions, giraffes and elephants. They’re the ones that appear in children’s picture books. The first time I travelled in non-English speaking countries, people with whom I couldn’t communicate in any other way would mime the bounding of a kangaroo to show that they understood where I was from.

The idea that kangaroos are plentiful, that they easily reach “plague” proportions, that they must be managed and often culled, is woven into the Australian psyche. The idea that they must always make way for our own activities, including racing cars through their remnant habitat is still pretty solid. But it is beginning to shift, as we become more aware of the environment and the other living creatures in it.

Every race on Mt Panorama has been held in the face of the risk of a kangaroo throwing a speeding car into dangerous tailspin. As a society we are increasingly risk-averse; risks we took in the 1970s (riding bikes without helmets! no seat belts!) are unacceptable now.

But one of the great, overarching risks to humanity is of environmental destruction, with climate change the ultimate expression of this. We remain strangely unmoved by this risk. But that’s changing. Around the world, our management of the kangaroos of Mount Panorama may ultimately be judged in this new light.