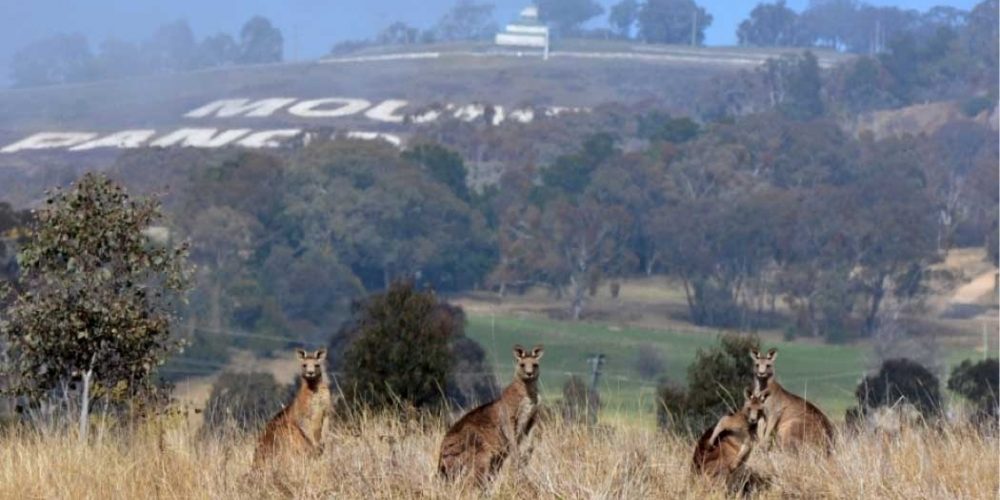 TO HELP THE FUNDRAISING EFFORT, GO TO THIS LINK:

It’s Spring, a time when yellow daffodils and wattles are joined by the pink blossoms of the plum trees. Magpies are swooping, other birds are feathering their nests. On the human front, there’s the build-up to the annual car race, where the local mountain plays host to thousands of people and buzzing cars.

This Spring, a mob of Mount Panorama kangaroos will be moving on, making way for expanded car race facilities. In years gone by, they would have been shot without a murmur, but the world is changing rapidly. As the ban on greyhound racing shows, society is becoming less tolerant of harm to animals. Here in Bathurst, we are experimenting with a new approach to animal welfare in the face of rapid development and habitat loss.

The Bathurst Kangaroo Project, led by Ray Mjadwesch and Helen Bergen, is now coordinating a massive voluntary community effort to relocate the displaced mob of kangaroos. This is an extremely difficult, expensive and time-consuming task. The kangaroos will be fenced in, darted with a sedative and transported to their new home, a property of over 800 hectares. The project is being supported by landowners, the National Parks and Wildlife Service, Bathurst Regional Council, academics and animal experts as well as a fleet of volunteers. It will be the largest licensed relocation effort in NSW ever recorded. The experience will provide other communities with information on how kangaroos might be relocated rather than culled.

While Council has agreed to pay the costs of darting consumables and the temporary fencing required to hold the kangaroos being darted, this represents just ten per cent of the costs of the relocation. Supporters of the project are now fundraising to help pay for other costs including extra medicants and darting consumables; communication systems; ear-tagging systems; room and board for out of town volunteers; fuel for transporting the kangaroos to their new home some distance away; admin consumables and much more.

For some, this whole process seems laughable: why bother about the welfare of kangaroos? Aren’t they little more than bounding pet meat? But for many others, this is a moment to reflect on how we want to co-exist with our fellow creatures on this fragile blue planet.

To find out how you can support this project financially or as a volunteer, to to The Bathurst Kangaroo Project on Facebook.