Quarry at Napoleon Reef – a threat to local biodiversity 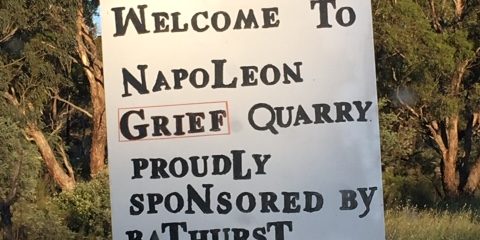 A small local community turned out in strength this week to defend their local environment from what they see as a critical threat – a development application for a quarry at Napoleon Reef.

In over an hour and a half presentation to Council local residents, Wiradyuri representatives demonstrated both their depth of knowledge and attachment to the biodiversity and the natural resources and landscape of this region.

The applicants for the quarry were shown to be wanting in their knowledge of the local environment as were their reports submitted to support the 2 hectare open cut quarrying operation close to the residences in an area populated by some 350 people around Hillview Estate.

A formidable knowledge of their rights and environmental protections was displayed in the submissions to preserve the region, its water and its biodiversity. The exceptional bushland of the region is beloved by its residents as a place to live alongside the areas unique flora and fauna.

A massive list of threatened species was rolled out along the council chamber floor to illustrate the inadequacy of the desktop environmental report prepared by the proponents of the quarry.

Embarassingly for council the project was demonstrated to threaten the habitat of Bathurst’s signature threatened species the copper-wing butterfly.  So too the ribbon gums which provide habitat in this region for the nationally iconic koala.

Local elder Jill Bower revealed the significance of the region named Walang for the stones collected there and stones used for axe heads and tools.  She referred to scarred trees along the river which mark burial sites and to the area also being the origin of Bathurst’s exceptional albino species of kangaroo and even magpie.

Water is a particular issue in the area and the once permanent St Anthony’s Creek has become intermittent under existing farm demands and increasingly warmer drier summers.  The residents asked what provisions were made to operate a mine in an area already reliant on ground water.  The impact of dust noise and heavy vehicles on local vegetation, their homes, their roads and water resources was also strongly opposed.

The defence of our local environment by local residents and traditional owners is heartening and has been a catalyst for the formation of a new local landcare group, the Napoleon Reef Landcare Group.  But should it not be Council defending the local environment rather than leaving this responsibility to residents and volunteers to take on corporations and developers.

Tracey Carpenter is the chairperson of Bathurst Community Climate Action Network. This piece was published in the Western Advocate on Saturday, July 4, 2015.