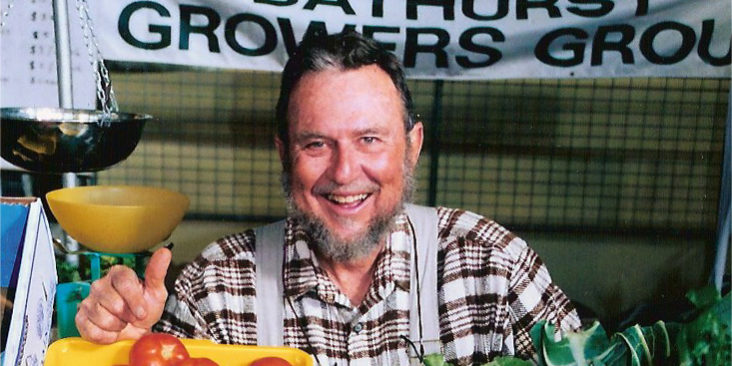 Born in 1937, Mr Macindoe created a small organic farm at Laffing Waters after a long career in the NSW Department of Agriculture and as a consultant. He was part of the founding committee of BCCAN in 2007 and an active member of the Bathurst Refugee Support Group.

He was the driving force behind the establishment of the Bathurst Wholefood Co-op, now a flourishing source of local and organic fresh food. His dream was to see Bathurst “producing 50 per cent of the food required to feed the people of Bathurst by 2050.”

“Ross Macindoe was a force of nature during his years in Bathurst, sharing his knowledge and enthusiasm for agriculture, the environment and social justice,” BCCAN President Jack Fry said. “He had a great sense of urgency around the issue of climate change.”

Mr Macindoe was honoured as one of the figures in the “peoplescape” on the grounds of the Bathurst Courthouse during Bathurst’s 200th anniversary celebrations in 2015.

In the early 1990s, Mr Macindoe conducted training courses for agricultural students and farmers throughout Cambodia. He continued his agricultural research and education interests in a lively exchange of ideas with the Bathurst Agricultural Research station in its final active years.

Mr Macindoe is survived by his wife Jennifer, two of his three children, step children and grandchildren.